Two new electric vehicle charge points, with a total of four sockets, have been installed at the council’s main office in Gernon Road, Letchworth, helping us achieve the highest 5-star rating for running our fleet of vehicles in an efficient and green way. 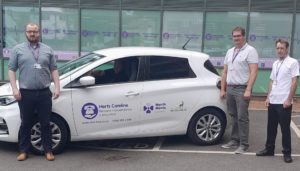 Currently the council has two plug-in electric hybrid cars considered ultra-low emission vehicles (ULEVs) which are used by our environmental enforcement officers. We also have a number of diesel vehicles which will be phased out in favour of electric.

Herts Careline, which is based at North Herts Council, currently has one fully electric van and three more on order for their engineers who travel across the county.

Up to four vehicles can be charged at any one time – they will usually be plugged in overnight when we have a lower rate – and special software will ensure ‘dynamic load balancing’ preventing any impact on the existing electrical supply to the council offices.

The new charge points form part of our work to reduce carbon emissions to fight climate change and improve air quality. To help us run our fleet of vehicles in a more environmentally friendly way, we commissioned TRL (Transport Research Laboratory), an independent world-leading transport consultancy. It runs the ECO Stars Fleet Recognition Scheme which helps operators reduce their fuel consumption which naturally leads to fewer vehicle emissions and has the added benefit of saving money – and the council has been awarded the highest 5-star rating!

Councillor Steve Jarvis, Executive Member for Environment, said: “We’re glad to receive the best possible rating for running our fleet of vehicles in an environmentally friendly way. We have had the two hybrid electric cars for a couple of years now, and officers have been sharing two older charge points, situated within the multi-story car park, with Careline. The new chargers – which triples the number of points to six – means we can start accommodating more electric vehicles, including those being leased by Careline, and continue reducing the council’s carbon emissions even more.

“We know our biggest challenge is to see how we can make our recycling and waste fleet more sustainable as those vehicles are currently traditional petrol and diesel. However our contractor Urbaser does a lot to reduce fuel consumption with driver training and monitoring, and received a good rating from ECO Stars. The majority of the recycling and waste collection and street cleansing vehicles are due for replacement in 2025, at which point we will explore the best options to meet our climate change targets.

“Our other suppliers, including John O’Conner Grounds Maintenance, are also getting help from the ECO Stars scheme.” 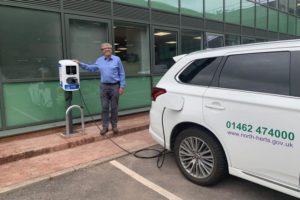 Cllr Jarvis with one of the new EV charging points

Speaking on behalf of Herts Careline, the award-winning telecare service which is also taking steps to go greener by refurbishing alarm equipment, Cllr Judi Billing, Executive Member for Community Engagement, said: “Using an electric van and leasing more electric vehicles means we’re on course to make Careline a much greener service. In addition, as some alarm equipment is often used for a short period of time – for people convalescing after a hospital stay or before they move into full-time care – we will be reusing it where possible. After being sanitised and professionally refurbished, equipment is as good as new and can be used again and again, making environmental and financial sense.”

The council declared a climate emergency in May 2019 and we reviewed our Climate Change Strategy in line with the latest research last year. Our key targets are to achieve carbon neutrality for our own operations by 2030, and achieve a net zero carbon district by 2040.

The new charge points were installed by independent experts JoJu Solar and cost just over £16,000 – this included groundworks and back office and maintenance fees for three years and isn’t comparable to installing a charge point at a domestic property.