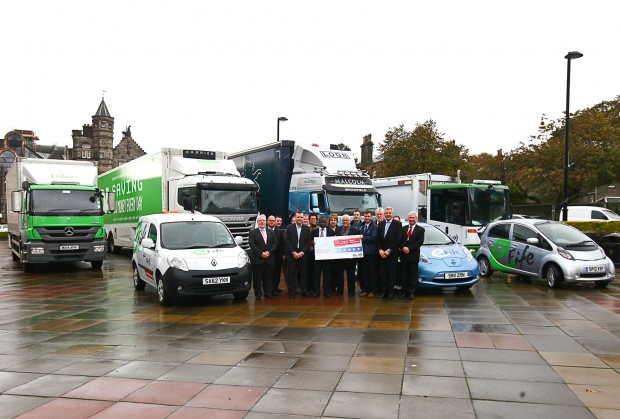 The latest scheme in Scotland has been launched in Fife at the Town Hall in Kirkcaldy.

John Lamb, Local Air Quality Management specialist at the Scottish Environment Protection Agency (SEPA) said, “SEPA is delighted to see ECO Stars being adopted at more and more locations across the country. With the Scottish Government Low Emissions Strategy due to be published shortly, schemes like ECO Stars can only help tackle the serious issue of air pollution which contributes to thousands of premature deaths across Scotland”.

Alasdair Wilson, Compliance Manager for W. H. Malcolm Limited commented: “Our company is proud to be awarded our five star top rating for environmental fleet performance and management. This recognises the benefits to the environment and the people of Fife through improved air quality, of the continued investment in maintaining a modern fleet with modern working practices.”

Cllr Pat Callaghan, Fife Council Executive Spokesperson for Environment and Transportation said: “We’re working very hard with our partners to improve Fife’s air quality and taking part in the scheme helps the Council on its way to reducing its carbon emissions by 42% before 2020. It’s great to see so many local fleet operators committed to improving the efficiency of their fleet and environmental impact”

Since ECO Stars began in South Yorkshire in 2009, it has now expanded to twelve areas in the UK including five in Scotland – Fife is joining Edinburgh, Falkirk, Dundee and North Lanarkshire with more due soon.