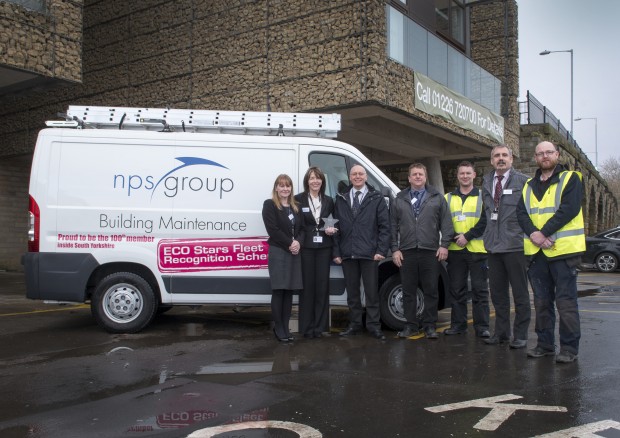 There was double cause for celebration in Barnsley as NPS Barnsley became the 100th organisation to join the ECO Stars Fleet Recognition scheme and seven other member organisations achieved upgraded ratings to reflect their improved environmental performance.

The milestone was celebrated at an event held at the Digital Media Centre on 29 January 2015.  A presentation was made to Karen Temple, Managing Director of NPS Barnsley by Ann Beddoes, ECO Stars Scheme Manager and Steve Houghton, Leader of Barnsley Metropolitan Council.  Certificates were also presented to the seven other organisations which have recently achieved higher star ratings.

Karen Temple, MD of NPS Barnsley said:  “We are delighted and proud to be named the 100th member and to get our 3 Star rating – especially as this scheme is led by Barnsley Council. The impact our business has on the environment is something we take very seriously, and by joining this scheme we will ensure air quality is one of our top priorities as we look to upgrade our fleet over the next few years.”

NPS Barnsley has 27 vehicles and a number of these has been rebranded with the ECO Stars logo to celebrate the company’s involvement in the scheme.

Since then, ECO Stars has gone from strength to strength. It has now been adopted by many other council areas in the UK including York, Edinburgh and Warrington as well as several cities across Europe. In total, the individual schemes have more than 200 members with 14,000+ vehicles.

Ann Beddoes, ECO Stars Scheme Manager said “It’s a real win-win situation – from a local authority perspective, ECO Stars can have a direct impact on reducing vehicle emissions and hence air quality – from an operator’s standpoint, they gain independent, free advice about how they can improve their fleet efficiency, reducing fuel consumption, and ultimately influencing their bottom line.”