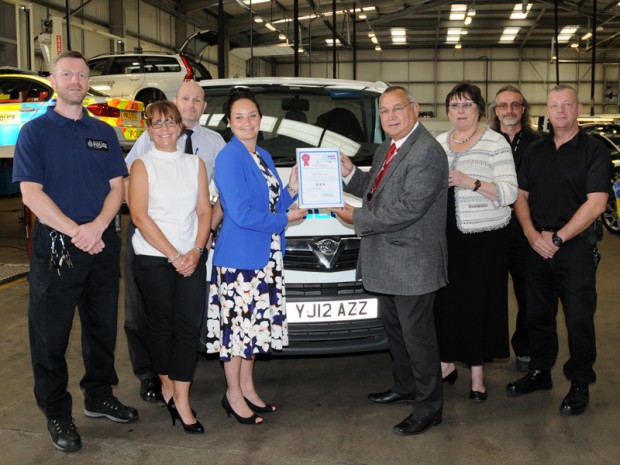 South Yorkshire’s boys in blue have flexed their green credentials as the first police force to join a scheme that helps to improve transport-related air quality.

South Yorkshire Police has so far had 162 vans and larger vehicles rated by the scheme’s industry experts who assess their current performance, both operational and environmental.

The Force has received a promising 3-star rating and is now working towards the top 5-star status with the aid of a tailor-made ‘road map’ to help further improve the efficiency of the fleet.

Sarah Gilding, Head of Vehicle Fleet Management, said: “It’s important that large organisations like South Yorkshire Police work in an environmentally responsible manner to enhance the lives of the communities we serve and to protect the natural environment. As a Force we are committed to encouraging greener travel and to maximising the efficiency of our vehicles to reduce our carbon footprint. Becoming the first police force in the UK to be part of the ECO Stars scheme demonstrates this commitment.”

Morag White, ECO Stars Fleet Consultant, said: “The ECO Stars team were impressed with the operational and management practices that South Yorkshire Police had already implemented and encouraged about the introduction of some greener vehicles into the fleet.”

The four South Yorkshire councils commissioned ECO Stars in 2009 but it has since expanded to include schemes from Devon to Edinburgh in the UK, as well as others in Europe as part of an EU project.

Councillor Roy Miller,Cabinet Spokesperson for Development, Environment & Culture for Barnsley Council, said: “The ECO Stars scheme is going from strength to strength since it began in South Yorkshire. It has now expanded to 13 more areas in the UK, and is helping hundreds of fleet operators become more efficient and reduce their impact on the environment. I’m delighted that South Yorkshire Police has joined the scheme.”

South Yorkshire Police is committed to a sustainability programme that aims to save money and reduce the Force’s impact on the environment.

Travel, as demonstrated by signing up to the ECO Stars scheme, is one of seven key areas that the Force is tackling to reduce its impact on the environment, the other areas being energy, waste, materials, pollution prevention, water and IT.