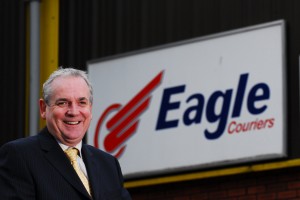 EAGLE Couriers has become the first courier north of the border to be awarded the top grade in a council backed initiative to improve air quality.

As part of a concerted effort to reduce its carbon footprint, Scotland’s largest independent courier was awarded five stars in the ECO Stars Fleet Recognition Scheme, which carried out an evaluation of its extensive fleet of vehicles.

The Bathgate based firm has followed the likes of Pepsico, First Group, Boots and Nestle in taking part in the free initiative which Scottish councils are backing in a bid to transform air quality in their towns and cities.

Director Jerry Stewart, said: “With a fleet in excess of 100 vehicles, all capable of racking up high mileage – even a one per cent improvement would greatly reduce our emissions and impact on air quality.

“We take pride in our responsible attitude towards fuel efficiency and reduced emissions and are delighted to have this recognised in our five star rating.

“That being said, there is always room for improvement and ECO Stars have provided helpful suggestions that we have already begun to implement as well as looking at installing anti-idling and in-cab fuel monitoring displays.”

ECO Stars is a fast growing initiative supporting councils to assess the efficiency of organisations’ fleets and the impact on air quality, offering expert advice to reduce impact, save money and gain positive recognition.

It also provides the tools and ongoing support for operators to reduce operating costs which makes the Scheme highly attractive and beneficial for the local economy.

This follows on from the firm receiving a ISO:14001 accreditation for environmental management after committing to annual targets of recycling 650 used tyres, 1100 pallets and 1500 litres of oil, waste that previously would have been sent to landfill sites.

Paul Wilkinson, ECO Stars Field Consultant for Scotland, said: “Eagle Couriers is exactly the sort of business we love to work with.

“They already operate in a very responsible manner and appreciate the benefits in improved operational efficiency beyond simply the financial.

“I would expect Eagle Couriers to make yet further improvements and be the type of firm to adapt to pioneering technology such as electric vehicles.”

Eagle Couriers has a 3500-strong client base including the BBC and the NHS, public sector organisations and sole traders. As business-to-business experts, Eagle Couriers help other firms operate more efficiently and profitably by safely delivering on time everything from documents, medical samples and engine parts to sports footage, scripts and TV props.

Further information on Eagle Couriers can be found at www.eaglecouriers.co.uk or on 0845 123 1230.